As I wrote before, we (my wife and I) went on a guided tour with a group of Renault Twizys on Lanzarote. That was quite an experience and I can definitely recommend it. 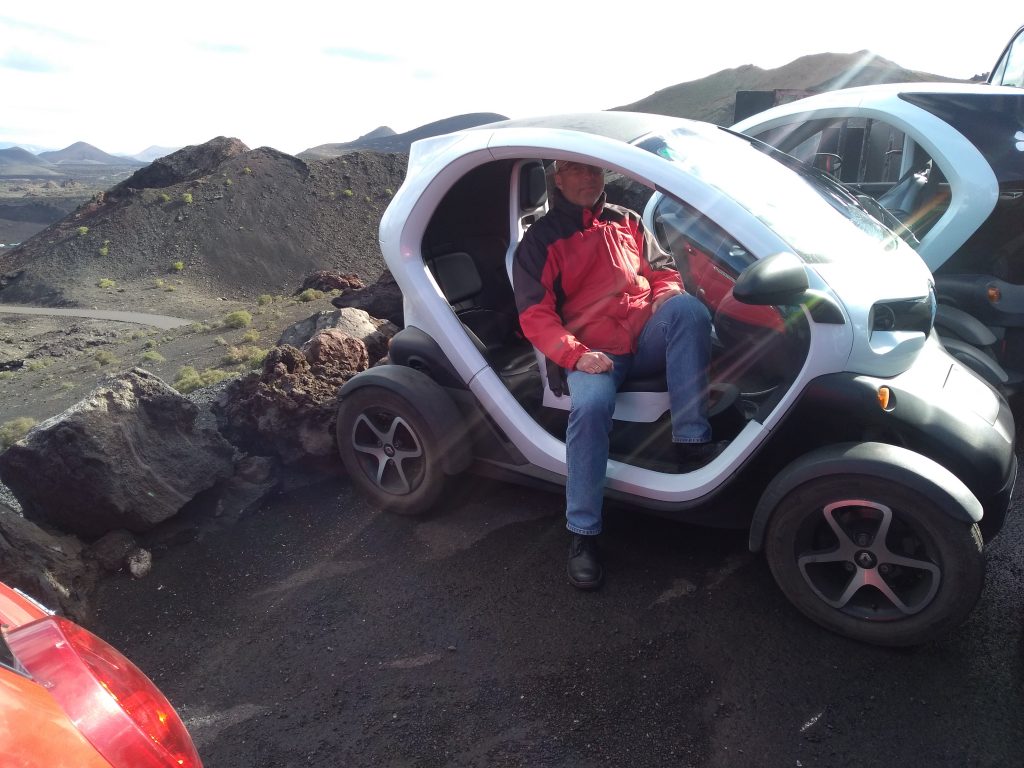 Unfortunately the weather was not good for that kind of excursion, we started out in a drizzle, later the rain stopped but it was rather windy and cold on the hills. In the afternoon it started raining in earnest. (Yes, that was on Lanzarote, not in Germany. They have bad weather there too on rare occasions.)

On the other hand that gave me an insight whether this “car” would be an option to buy in Germany (if I ever need a car again). The short verdict is: No. It’s not suited for the kind of weather we have here. It’s fun to drive when it’s sunny and warm but much less if it isn’t.

“Our” Twizy was the basic version without doors or even windows. The roof is too narrow to keep rain out. The wind was quite chilly and without thick cloaks we would have been freezing. I even considered putting on gloves. But actually the temperature was well above 10 degrees Celsius. Currently here in Essen, Germany the temperature is about 0 degrees Celsius. That would be a no go even with doors and windows (but without heating, which would eat into the range too much anyway).

According to our tour guide it has a maximum speed of 95 km/h and a maximum range of 70 km. The speed would be OK for short trips (e.g. a typical commute). But I severely doubt the range. We climbed uphill to 500m and the battery charge dropped to 50%. That was quite a surprise, but on the other hand, a Twizy has a heavy battery and in addition it had to carry two adults (I weight about 85 kg, my wife is much lighter.). Other participants were even worse off, there were some whose car had to be recharged to make sure they can get back “home”. That might still be OK for commuting but even 70 km, or rather 35 km one way, is quite a restriction. Fully recharging the battery takes 4 hours according to the guide. On the upside it only needs a standard 230 volts outlet which is available everywhere.

Parking a Twizy requires a garage. I would not dare to park it overnight on the street (at least not here in Essen). And where would you charge it there anyway?

According to the guide a Twizy costs about 9000 Euros on Lanzarote, where it is heavily subsidized by the government. On top of that you have to rent the battery which depending on how far you drive starts from 50 Euros per month. In Germany there is no subsidy but a used Twizy costs about 6000 Euros. No idea what a new one would cost or if it is even available.

As a fun car for sunny weather it is nice, but even then the range severely restricts its usefulness. Using it as an every day car e.g. for commuting is just not feasible due to the low temperatures we get here (and Essen isn’t even that extreme, we rarely get less than -10 degrees Celsius, elsewhere in Germany it can get much worse).